Nasu Fantasia is a very detailed fan site in Japanese

John Breslin has an English language board discussing Tomita at Boards.jp

Current USA cat #s are in this color.

jump to best of material

pictured above is the Japanese cover art

Big concert event in Austria. For the most part Tomita seems to be remixing his released tracks. Some new pieces are included, often with live soloists (in this color below, I've matched the names of the same pieces even if the same piece has a different name). I felt dissapointed by the long and artistically dissapointing version of Beethoven's 9th using synths and live orchestra. (I'd take Carlos' Clockwork Orange version any day.) Thinking about I think it comes to it leaning toward a sort of pop influenced feeling, nothing interesting is being done with the piece.

Tomita is said to have played the lead melody in the Firebird finale live, the rest was tape with several guest soloists. Out of print in the U.S. and Japan.

The Rite of Spring was announced to have been his next classical album, but it was never completed AFAIK. One can hear an openning excerpt of Rite of Spring on this album. While not his most amazing interpretation it's facinating none the less.

The piece Blast Off contains sound effects material from The Planets with some vocoding. It acts as more or less a bridge rather than a stand alone piece.

I've come up with a theory that a notable difference between the Japanese and U.S. versions is that there are no Holst tracks on the Japanese version. I doubt they were an issue in Japan but perhaps the version eventually released in Japan was originally prepared for Europe where "The Planets" faced legal problems in the 70s. The released Japanese version also contains a German language spoken introduction. This wouldn't be much appreciated in the U.S., but had there been a unique European release the German speaking audience might have liked it ... Japanese listeners might also appreciate it not for the specific language but that it was such a major show in Europe and the announcer sort of helps document the grand scope of the event.

This is a recorded synth orchestration of a light 19th Century opera by Humperdink. The video version once available on VHS or Laser Disc with stereo tracks shows a live stage performance sung in Japanese with sets and costumes. Tomita's music is apparently played back from tape with the live singing being added onstage. You do not see Tomita or anyone perform on instruments, the video focuses on capturing the sung performance. Tomita creates a blend of orchestral sounding synths and samplers with occasionally more fanciful electronic highlights.

All Bach interpretations. Tomita uses more analog synths than he has in years. Includes a CD-ROM partition showing his studio and past synth albums. 2 tracks are from previous albums. This remains Tomita's most recent classical syntheiszer album (Released in Japan only)

Tomita- A Voyage Through His Greatest Hits

The cover is the art from Grand Canyon Suite in monochrome and printed in blue (cyan) ink.

info on this release is from Gored Gelean. No rare tracks, this was obviously sent out in the U.S. to remind radio stations I presume that Tomita had a whole catalog of work available.

Space Walk: Impressions of an Astronaut (best of)

A repackaging of previously released material most likely aimed at the U.S. market. The tracks have new space inspired names. These are the same tracks. Don't be fooled by rumors this is an album you've missed. A not often seen CD exists. Maybe the intent was to get out some kind of CD compilation during the early days of CDs? Out of print. 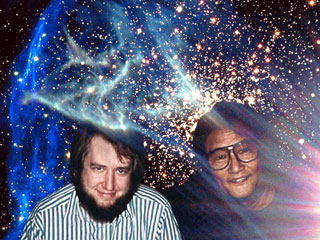