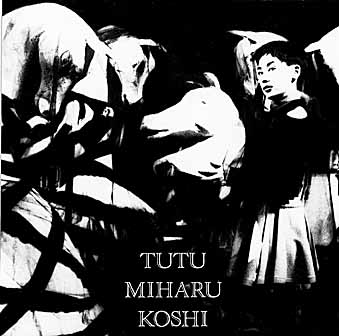 (@) Means I've listened to, but do not own this album.

her current label, daisyworld , with info in Japanese

Early pop material. This is like an idol album. She's transformed herself 3 times to some extent. First her early idol career. Her new wave period starting in 1983. Then her transformation into a chanteuse with ecclectic european art songs starting in the mid 1980s

Frederic adds all the following: --> Very eager to launch Miharu Koshi as a new idol act, RCA released three singles just after Toy Box was on the market. Two are from the Toy Box album and the third is totally original material. Here are the details :

Track one is from Toy Box. Track two is previously unreleased.
Please note (for die-hard fans) that there are two different covers for this single. First is Miharu facing us, near a piano, on brown background. The second is Miharu, closer, playing piano on a bright red backgroung. On the second, she is MUCH cuter.


Kimagure Highway (Fantasy Highway) / Gogatsu no kaze (The Wind from May)

Both tracks are from Toy Box.

Both tracks are previously unreleased. Apparently, this single was to be included on the never released Toy Box 2…

On The Street - Miharu 2

More young pop idol material as far as I know. No CD re-issue.

Arrangements by "Miharuomi" and on Yen Records. A guarantee of excellence. Similar style to the last album though it has a less overt Telex feel. The melodies are a bit less catchy though.

European style art songs produced by Hosono/F.O.E. Here she begins the crossover to chanteuse, though it is still technopop. Reissued in 2001.

out of print. Indie release. Rare. Reissued with extra tracks in '93. That version was rare and limited too.

Frederic adds:--> Actually, the original version of L'acqua sonora is from 1983. The version included here is a Koshi / Hosono re-recorded version from 1986.

Witty classical music + some Leroy Anderson and standards. HH executive produces. I think her transformation to chanteuse is complete at this point.


Frederic adds: These two tracks are the same than on the Passepied album.

Shinzo no Ue (“Above the heart” or “On the heart”)

a quite elusive book with a CD

Frederic adds: Medium format hardcover CD book from Miharu Koshi and Zin Akagi (graphic designer and illustrator). 90 pages. Black and white and monochrome texts and illustrations. For those who have Passepied, Der Vater und die Pistole, Source d'espoir or Chanson Solaire you know who Zin Akagi is, since he did all the design and illustrations for these four albums. The cover of this book looks a little like Passepied : a girl with an orange dress, playing hide and go seek with a little tiger.
The CD given with the book is more a mini-album than a full length album. All tracks are classical music re-arrangements from very popular composers like Erik Satie, Maurice Ravel, Paul Hindemith, Tchaikovsky, etc… Haruomi Hosono and Koji Ueno play various instruments.

produced by MK & HH. Follows in the chanteuse style. The twist here is a substantially German language album.

Frederic adds: Bonjour Coucou is from Source d'espoir. Track 2 is from La voix de Paris. Same versions.
This single is quite unique in its presentation. It's vertical, like almost all japanese singles, but the front part unfolds right and left. On the cover, Miharu is in a magician's box. On the right part, there is a seal playing with a ballon and a straw mannequin putting swords through the box where Miharu is. On the left part, we can see the magician itself : a man with the face of a cat…

More chanson. Mostly synths compared to the more traditional arrangements of the prior album. Nice as usual.

This is a collection of pop songs written by Toru Takemitsu and sung by a female vocalist named Seri. I believe this album was made under the late composer's supervision. I had this album for several years before Sonoko pointed out that Miharu Koshi arranged several songs on it. Listening again, her arranging style is really clear. It was the combination of the first song not being arranged by MK and in a sort of jazzy style, Seri instead of her singing, plus her name only appearng in small print Kana text which lead me to never realize what's obvious in hindsight.

This is a retro lounge album. It's cute and funny. Good Morning Mr. Echo cracks me up with HH singing and Miharu providing the voice of Mr. Echo. Sometimes there is clever use of synths substituting for lounge instruments. (Terry Green let me listen to his copy)

Compilation Track: Contains the Hosono billed track Ether Vibes (7:51) which was written by HH and Miharu Koshi and appeared with a different mix on Swing Slow

this is witty eccentric French music with a Wild West flare. (playing up the leather, ropes and whips part in the art direction) Hosono shows up on a track, Koji Ueno co-arranges one, Sô-si Suzuki (World Standard) works on 2. Pretty unique.

Healing Voices from the Sea

compilation track: Bachibouzouk Marche (info: Ron Kane) Credited to "Koshi et le Bachibouzouk Band" - they are the usual back up band to "Arthur H", who is the son of French folk singer/cultural icon Jacques Higelin.

The Murder on Pelican Street -- art songs with a touch of intrigue. Hosono drum programs on several tracks. Sô-si Suzuki collaborates on one. Most tracks composed by MK though we have a Raskin/Mercer tune and Ave Maria . Seems to be out of print.

Haven't heard it yet. This seems to be a charming 30s style. ReWind, the distributer seems to have shut down so especially this last one is hard to locate as it seems to have been the last Daisy World release with them. Seems to be out of print.

-The compilation of Daisy Creatures-

Copyright Notice! Compilation, design, and layout of this web page is copyright 2002 Nicholas D. Kent. All rights are reserved by its individual trademark/copyright holders. This web page is a product of fan appreciation and is not intended to infringe upon properties held by its rightful owners. Any part of this web site may be duplicated and distributed to other networks and BBSs UNMODIFIED, with all ownership and copyright information intact. No portion of this web page (including but not limited to documents, images, and sound clips) may be sold in any way and is expressly forbidden. (Thanks to Kyong Il Lee for writing these lines.)