(@) means I've heard this album but don't own a copy

I've separated the Japanese from the international releases because of the confusing overlap. 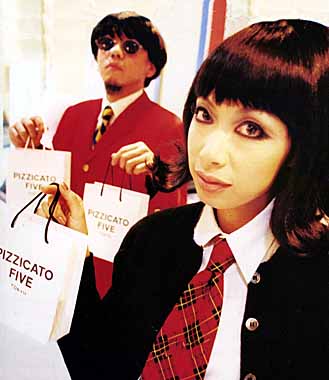 Several fans have indirectly brought up the the question of "what is this kind of music called". While the term J-Pop is beginning to be used commonly outside Japan. The term is similar to saying something very broad like British pop music. There is nothing wrong with it, but going deeper one discovers, like many 1980s fans of Technopop discover that the vast majority of Japanese music (or for the vast majority of pop music for that matter) has little resemblence to the cool sounds one has discovered.

If you are one to categorize music, Pizzicato Five falls into a subgenre called Shibuya-kei (Shibuya style or Shibuya form). It is named after the part of town where a lot of the music offices, record shops are.

Some other acts that probably fall into this style are Cornelius, Towa Tei, Buffalo Daughter, Takako Minekawa, Nav Katze, Kahimi Karie, Fantastic Plastic Machine, stuff on the Sushi compilations. All of the above have had solo releases in the U.S. (Nav Katze only has a remix album out of Beligum). Interestingly the U.K. act Gentle People also falls into this style by association. One could argue the Doopees and Sunahara would also fall in this category.

Pizzicato Five pioneered the use of odd CD packaging with little gifts. This material usually is dropped when more CDs are manufactured, making the first "special packaging" versions more collectable. Sometimes though all the full price CDs will continue to include it. (for some bands, releases will appear some years later in very plain packaging but at a lower price (not really the case for P5 though.) The remastered versions do have new packaging. If they are cheaper, it's not by much) This is not unique to P5, many Japanese acts do it. I've not been able to catalog the differences for P5.

In the Audrey Hepburn Complex

Their first record. They were PIZZICATO V back then. Hosono produced. I coaxed WNYC's David Garland into playing their cover of "Fellin' Groovy" over the airwaves (from my 12") back in 1988 when I got to be "John Zorn for a day" on FM radio. Zorn would drop by the show fairly regularly and play eccentric Japanese pop followed by New York hardcore. He did beat me by playing P5 on the radio earlier than I did.

Hosono produced. Has that "Non-Standard" sound. Both this and the above are available as a 2 cd single set called non standard years, pizzicato five '85-'86

On Her Majesty's Request

I've listend to this one. Nearly all the vocals are male. Lots of orchestra. There is a piece that has a recreation of Kraftwerk's beats on The Telephone Call.

Soft Landing on the Moon

This period didn't have a female singing member. None the less this is an interesting and elaborate 22 track pop album

---These last 4 albums are now remastered by sony. It is said that they have some samples removed or replaced. For a while they had solid color slip covers but don't currently.

Hi Guys! Let Me Teach You

Instrumental TV soundtrack with only a couple hints of vocals. The finale is in the style of Perrey & Kingsley. Composed by Takanami, billed as the TAKANAMI, Keitaro Combo & Orchestra. Part of the Five by Five series. Sounds quite different from other albums I've heard most likely because Takanami is in charge instead of Konishi.

Elaborate packaging. In line with their other releases especially the US versions. Keigo Oyamada produces. He is now extremely influential in the music scene and releases under the name of Cornelius.

Has the Ugo Ugo-Lhuga kids from a quirky "children's" show by that name that P5 were frequent contributing guests on. The booklet is printed on super thick children's book paper. Includes Me Japanese Boy in Japanese.

Best of. TYO is the airport abbreviation for Tokyo and I think their company or something . Includes a complete set of airport luggage stickers and tags. I don't know the albums well enough to know how much of this stuff is "best of" and how much is unique to this cd in Japan or the U.S.

This was slated for US release by Matador as Romantique, but never made it out. Good is already out onthe U.S. cd Sound of Music, so I suspect the US release, if it comes, will have different contents.

PR Comments: A collection of catchy but mostly lightweight pop songs, several of which are reminiscent of the romantic Takahashi sound on "Saravah!", easy listening styles, Bacharach and so on. The songwriting is very strong, but then a lot of the songs appear to have been the title tracks of their albums. My copy is an Austrian pressing in an outer box with a booklet and extra card sleeve inside. The deceptive packaging, which never mentions the country of manufacture, may lead you to think this is a Japanese edition (I thought it was).

Maki Nomiya was expecting a baby. In the 80s before Pizzicato 5 she was the lead vocalist in the band Portable Rock.

PR Comments: Budget priced release housed in a gatefold card sleeve. There is also a fold-out insert which unfortunately is far more attractive than the music. Dreadful, rough, almost 1980's UK indie sound, which got it some favourable reviews in the UK inkies. Avoid this if you are a fan of their material like "Happy Sad", "CDJ" or "The Night Is Still Young", because this is nothing like it. However, you will like the next CD (Combinasion Speciale: Pizzicato Five In Dub) a lot...

PR Comments: An excellent disc that features a lot more electronics than most of their material. Well packaged in a gatefold card sleeve with an attractive fold-out insert. This material is in complete contrast to Sister Freedom Tapes, perhaps an indication that the group are torn by the two directions they are expected to perform well in; the Western press expect them to be a 60's influenced pop outfit with James Bond and Mission Impossible flourishes while the Japanese public, having bought more danceable titles like The Night Is Still Young in great numbers, expects more of that.

NK: 2 tracks have the Denki Groove sound since they are by Sunahara.

Happy End of the World

Marco van Meerten writes: The cd comes with a little booklet, and 2 little cards (one with Nomiya Maki, dressed in a kimono, and one with Konishi Yasuharu, wearing some kind of business suit).

NK: the Japanese packaging is very different and hard to discribe. This was their first full length album to be released intact musicwise overseas. It does have some long, non-singing passages in Japanese.

NK: there must be at least a dozen singles in Japan. Some limited edition. I cant keep up with it all!

Marco van Meerten writes: Do I like it? Well, it sounds all right to me, but not so "technical" as their other albums. When I listen to this cd, it's just like I'm stuck in some kind of time-warp. I picture myself shopping in London at Carnaby Street, around 1967, while this music is playing in the background! Again it's heavily influenced by the Beatles, Astrud Gilberto and a little bit of Burt Bacharach! And not futuristic at all. But the strings are there, which are great! Hopefully their next album has some kind of disco-flavour!

NK: this album definitely is going for an authentic retro feel and the professional production values expected in a top flight album of an earlier era.

During the years before the US releases, I saw them at one of their first (if not their first) U.S. show, which was headlined by Shonen Knife.

Interestingly 5 or so later albums were showing up in NYC at $20-$22 each in the 90s(wich is less than they normally cost in Japan) I'm told Matador has made an import deal. I am also told that the booklets and gifts in these imports are now missing. I do not know if these items are now normally not included in Japan also, or if these imports are from a special production run from Japan to bring the price down. A lot of initial CD releases have special packaging that reverts to normal packaging after 5000 or some number of CDs. Sometimes the first run of a Japanese album will have deluxe packaging which is later revised. I think they are pretty much all sold by now. 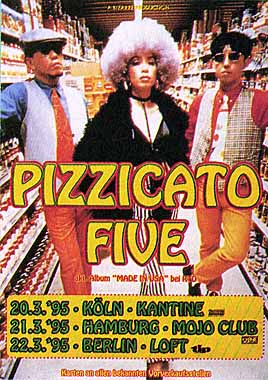 Now matador seems to be releasing their albums with the same contents as in Japan.

First US album. Compiled from the Japanese releases. Possibly different mixes. Loads of fun. Very sample heavy. I make no reccomendation of them from an electronics viewpoint. On the other hand, they are real interesting in the way they recycle old jet-set material into new numbers. The group: Konishi, Takanami and Nomiya.

Their huge back catalog is rumored to be somewhat problematic for U.S. release because of heavy use of uncleared samples.

First US release. Mostly different but related material from the above album

I didn't pick this one up based on the apperent near identical tracks on the album.

Secret-Secret Rob adds: There is one track on it that make's it worth picking up. The radio edit of "Magic Carpet Ride." It's a little over a minute shorter. Compressed and mixed better too. It gives the song more of a kick. I was rather surprized that this song didn't do well for P5 here in the states as a follow up to Twiggy.

The Sound of Music

Movie tie in. Not much different from the album to my ears. Nothing special.

Happy End of You (remix)

better than average album of remixes, some mixes strike me as more repetitive rather than falling into a groove (in which case the repetitiveness isn't bothersome)

I think the first CD release added a track so the "+1" was added, a fairly common reissue practice. This was an 80s band with Maki Nomiya singing lead vocals. The ablum was procuced by Keiichi Suzuki. Quite enjoyable with some catchy tunes.

performed by OUT OF TUNE GENERATION

This is the first of the Cine Techno series, which consists of synthesizer cover versions of movie themes done in a technopop style.

there's a volume 2 that I haven't heard. Yukihiro Takahashi did 2 albums of his own similar concept Cine Techno some years later.

thanks for info from Ty Liotta (fan) page Pizzicato Five

I'm still working on my links. There are many many pages, so I havent been all that dilligent on this one. (and have yet to see anyone link my page). 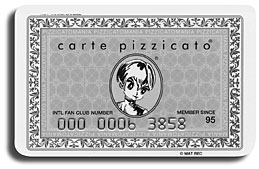