(*) means I've not heard this album

(@) means I've listened to this album, but don't own a copy

hyperreal.com has a short page on Ayuo Takahashi by Terre Thaemlitz.

Pnuma palys the instruments. Takami the words and vocals. I bought this because I wanted to get something more recent by Pnuma (if such exists). Turns out this was an 80s recording. Maybe everything on Belle Antique is vintage? The 1983 date is only to be found inside the booklet. I hate inaccurate CD dates. Some tape hiss. Spooky vocals with reversed echoes over acoustic and electronic material. Chilling.

I could go on and on talking about Takemitsu, one of the world's great composers. Sufice to say he is unquestionably one of the finest Classical composers this century and while other classical composers have done film music, and visa versa., Takemitsu is the only one with a large body of film music (and of the very highest quality). He died in early 1996.

1960s film scores with concrete electronics are Woman in the Dunes and Kwaidan [Kaidan] both sometimes found on compilations. 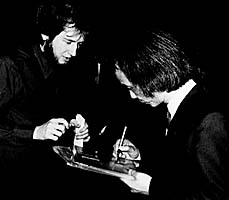 It's out of print, but the contents are still available in Japan. This would be considered a classical album. The electronic pieces are:

Vocalism A - I (1956) which is a tape piece that deconstructs the phrase "ai". Later was an animated film in the early 60s.

Water Music (1960) the sonic material here is dripping water processed into something quite musical.

Kaidan [Kwaidan] (1966) is a 4 part 27 minute edit of the soundtrack to one of the great avant garde features of the 60s. It's traditionally set Japanese ghost stories (by a late 19th century American author living in Japan). Takemitsu had great ability to shape the entire soundtrack, not just the music. It consists of traditional Japanese sounds seriously altered by studio techniques and editing.

The Legacy for the Future

This is an NHK documentary TV score from a 1974-75 series released on LP in 1977 and reissued on CD in 1997. It attracts additional interest since a track was selected to appear on Carl Sagan's 1980 TV Series Cosmos and its soundtrack album. The main theme and a few cues feature Ondes Martenot leads with orchestral backing. It's all around a wonderful score with lots of middle eastern touches. Its the only time I can think of where Takemitsu tries anything Middle Eastern and he combines those sounds with some of his trademark floating chords and sho reminicent lines along with some Debussy-like flourishes.

Rising Sun is included here because it has a good amount of Ondes Martenot playing and was released in the US. The album is very short and is compiled by ex-David Lynch sound designer Alan Splet.

This is an interesting cover album. It has only minor synth use but is interesting since it is Takamitsu's pop songs dating from 1952-1983. Also of interest was the album was supervised by the composer.

Testpattern are Masao Himura and Fumio Ichimura. This is an absolutely superb album of refined technopop slightly in a Telex tradition. Produced by HH. Only currently available on Yen Box Vol. 1

Only 2 more tracks of Testpattern appear on YEN Manifold Vol.1 plus a remix of one on YEN Memorial Album. Himura was responisble for the Apogee and Perigee album. What happened to these guys? This was really good and the latter stuff is not bad either.

This seems to be intended as sort of mainstream N.Y.Club Style. Tomiie recorded a lot of it in N.Y. and its released on a major label imprint, but I'm sure its also supposed to be quite acceptable to the Japanese market too (it looks like he's signed there). About 2/3rds of the tracks have lyrics by various guest singers, it sound hip enough for 1999 but there is nothing really cutting or odd and distinctive like former New Yorker Towa Tei goes for. I'm sure this is meant for a mainstream audience so its not of much interest to me or friends with like interests.

Synth depictions of the 12 signs of the Zodiac. His prior LPs (I haven't heard them) are : The Comet (K28P 469) and Mando Manage (K28P-589). Soaring peaceful music with excellent smooth violin throughout. Good flow from piece to piece. Nice package, several imperfect tape edits on the master recording are reproduced.

Copyright Notice! Compilation, design, and layout of this web page is copyright 1998 Nicholas D. Kent. All rights are reserved by its individual trademark/copyright holders. This web page is a product of fan appreciation and is not intended to infringe upon properties held by its rightful owners. Any part of this web site may be duplicated and distributed to other networks and BBSs UNMODIFIED, with all ownership and copyright information intact. No portion of this web page (including but not limited to documents, images, and sound clips) may be sold in any way and is expressly forbidden. (Thanks to Kyong Il Lee for writing these lines.)