(*) means I've not heard this album

(@) means I've listened to this album, but don't own a copy

(*) Kenji mori writes: This is from the radio program Sound Street  (NHK-FM Tuesdays), Sakamoto was the DJ of this program. This CD is from a popular segmentof that program named "Demo Tape Special" This was a segment playing demo tapes from the show's listeners and Sakamoto added comments. This CD is made from the demo Towa Tei sent to the show.

nk: I don't have a date handy but I know the material comes from before he was known as a solo act.

Towa Tei made it big in New York with Dee Lite in the 80s. This is his first solo. He shares many of Sakamoto's N.Y. collaborators like Arto Lindsay and Natasha Diggs. Sakamoto plays jazzy piano noodlings and some string arrangements on 3 tracks. RS and HH play on a track. Other guests are T. Fuji, Y.Shimizu, Tachibana, Matsutake and Maki (P5) Nomiya.

This album is fun. The electric sitar playing is cool. Very entertaining but not all that substantial.

Lots of stuff, pretty fun, doesn't quite grab me, lots of it seem based more on feel and style than strong material to start with. Still its well worth a listen and has lots of clever bits.

Includes a Towa Tei remix of the group En Vogue. Listenable but not that memorable.

Pacific 231 and Lisa Carbon are on Hosono's daisyworld label. No U.S.release

Maybe more songlike without losing the club sounds. guests are : CHARA, UA, H. HOSONO, Y. TAKAHASHI (now having collaborated with all 3 members of YMO though never on the same album.)

The singer and co-lyricist is Ikuko Harada from Clammbon. Everton Nelson (Sakamoto "1996"') does some distinctive real strings arrangements. Pretty appealing in the final "Mars (Version)", otherwise on par with his typical material. Happy 2000 is mentioned as part of the Sakura Hills Disco 3000 album which I preume is his contrinbution to that album.

Towa Tei has a duo with Toshihiko Mori named SP-1200. (Sounds like the name of an old (American made) E-mu drum machine) I saw him on a TV show in a different campy duo called Koji 1200. He has another side project called Sweet Robots Against the Machine. 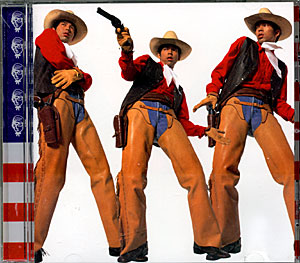 Copyright Notice! Compilation, design, and layout of this web page is copyright 1998 Nicholas D. Kent. All rights are reserved by its individual trademark/copyright holders. This web page is a product of fan appreciation and is not intended to infringe upon properties held by its rightful owners. Any part of this web site may be duplicated and distributed to other networks and BBSs UNMODIFIED, with all ownership and copyright information intact. No portion of this web page (including but not limited to documents, images, and sound clips) may be sold in any way and is expressly forbidden. (Thanks to Kyong Il Lee for writing these lines.)