Buffalo Daughter are suGar yoshinaga (guitar, 303, vocals), yumiko ohno (minimoog, bass, vocals) and moOog yamamoto (turntables +voices. he spins mostly old moog synthesizer records). Yumiko and Sugar were previously half the band Havana Exotica formed a band with DJ and graphic designer by day Moog formed Buffalo Daughter to explore some, at least in terms of JPOP, out there musical ideas. They've also produced for other artists, most notably Takako Minakawa who broke out in a new direction with the album they worked on. The Beastie Boys signed them for their U.S. label Grand Royal making them one of the very rare japanese acts signed directly overseas (unconnectedly it appears Isao Tomita's classical synth albums were also done under contract to an American major label). Unfortunately Grand Royal folded some years ago which might have added to the long postponement of their album i. Since then they have signed to Virgin Records founder Richard Branson's label V2. The bad news is V2 I don't belive has a releasing setup in the U.S. so their albums and subsequent live shows have bypassed the U.S..

It's worth noting for new collectors that their Grand Royal releases are out of print outside of Japan. However they were released in sizable numbers so certainly the major albums are quite findable and affordable on the used market.

Their style seems a very quirky take on many styles of American music combined with 70s Krautrock electronics and up and coming electronica elements, taken in a mundane context, just that- trendy riffing, but in the context of the other stuff not usually found along side it, quite original and creative

The Legend of the Yellow Buffalo

Contains 2 songs Cold Summer (from the above) and Daisy (seems to be from Shaggy Head Dressers but non-album in the US) . Clear yellow vinyl.

This is an out of print and seldom seen computer game soundtrack where each band plays new though often fairly simple instumentals on alternate tracks. There is a cartoon monkey stick figure on the cover so I assume this is a fairly minimalist game.

this CD5 single was released first in England (98) then in '99 in the US (no differences). The Cornelius remix also showed up on CM by Cornelius, a US and Japanese released album of his own remixes of other artists.

a live 7" 33 1/3rpmclear pink vinyl single from a 1999 shows in Osaka. Hajime Tachibana does the sax in question and did the single's collage cover artwork. The B side track has no sax but does have a delicate solo by yumiko.

moOog and his wife mariko are phonic, a graphic design company. He DJs and even played guitar collaborating with Yuka Honda in 2005.

yumiko was a member of Hajime Tachibana's Low Powers and Yann Tomita's Astro Age Steel Orchestra as well as in 2006 backing on new Yann Tomita projects on the side. She does not have any upper case letters in the middle of her name. 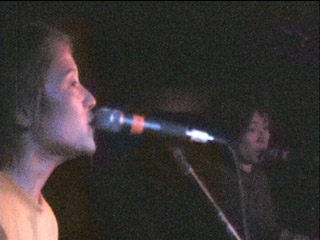 thanks Tokion Magazine for the event!

Copyright Notice! Compilation, design, and layout of this web page is copyright 2000 Nicholas D. Kent. All rights are reserved by its individual trademark/copyright holders. This web page is a product of fan appreciation and is not intended to infringe upon properties held by its rightful owners. Any part of this web site may be duplicated and distributed to other networks and BBSs UNMODIFIED, with all ownership and copyright information intact. No portion of this web page (including but not limited to documents, images, and sound clips) may be sold in any way and is expressly forbidden. (Thanks to Kyong Il Lee for writing these lines.)